Climate change is killing penguin chicks from the world’s largest colony of Magellanic penguins, not just indirectly – by depriving them of food, as has been repeatedly documented for these and other seabirds – but directly as a result of drenching rainstorms and, at other times, heat, according to new findings from the University of Washington.

Too big for parents to sit over protectively, but still too young to have grown waterproof feathers, downy penguin chicks exposed to drenching rain can struggle and die of hypothermia in spite of the best efforts of their concerned parents. And during extreme heat, chicks without waterproofing can’t take a dip in cooling waters as adults can. 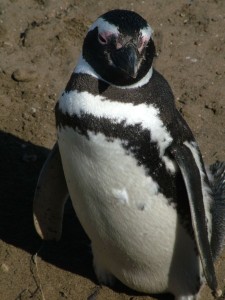 The new results span 27 years of data collected in Argentina under the direction of Dee Boersma, UW biology professor, with the support of the Wildlife Conservation Society, the UW, the Office of Turismo in Argentina’s Chubut Province, the Global Penguin Society and the La Regina family. Boersma is lead author of a paper on the findings in the Jan. 29 issue of PLOS ONE.

“It’s the first long-term study to show climate change having a major impact on chick survival and reproductive success,” said Boersma, who has led field work since 1983 at the world’s largest breeding area for Magellanic penguins, about halfway up the Atlantic coast of Argentina at Punta Tombo, where 200,000 pairs reside from September through February to have their young. During a span of 27 years, an average of 65 percent of chicks died per year, with some 40 percent starving. Climate change, a relatively new cause of chick death, killed an average of 7 percent of chicks per year, but there were years when it was the most common cause of death, killing 43 percent of all chicks one year and fully half in another. Starvation and weather will likely interact increasingly as climate changes, Boersma said. 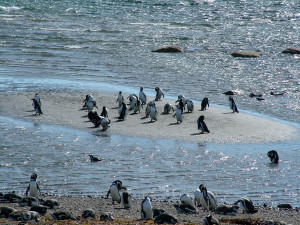 “Starving chicks are more likely to die in a storm,” she said. “There may not be much we can do to mitigate climate change, but steps could be taken to make sure the Earth’s largest colony of Magellanic penguins have enough to eat by creating a marine protected reserve, with regulations on fishing, where penguins forage while raising small chicks.” Also contributing to increasing deaths from climate change is the fact that, over 27 years, penguin parents have arrived to the breeding site later and later in the year, probably because the fish they eat also are arriving later, Boersma said. The later in the year chicks hatch the more likely they’ll still be in their down-covered stage when storms typically pick up in November and December.