The EAZA Pole to Pole Campaign was officially closed during the EAZA Annual Conference Wroclaw last September. The campaign ran from September 2013 to September 2015 and it can be said great things have been achieved. Many people across the globe (not necessarily zoo visitors) actively joined in the Pull the Plug pledge as well as signing the petition. An overwhelming number 250 participating institutions worldwide signed up for the Pole to Pole Campaign and showed the commitment and involvement of the zoo community towards combating climate change.  It was amazing to observe the enthusiasm of all colleagues who produced educational materials, including colouring sheets, factsheets, infographics, stickers, informational brochures and leaflets as well as logos. The resources were translated from English into seven European languages including Czech, Swedish and Polish.

Until this date (Mid-January 2016) 3123 individuals registered the pledge to pull the plug of a total number of 12214 electronic devices (which are not in use) for the upcoming months. This means that together we have saved 338762 kilowatt-hours of electricity (!) which equals: 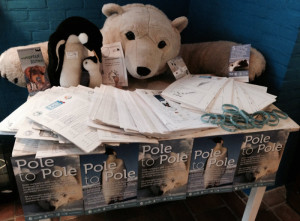 The pledges of the participants were registered in a database and monitored throughout the course. Participants received occasional reminders and at the end of the pledging period successful participants received an exclusive digital photograph for personal use, taken by Daniel J.Cox/Natural Exposures and generously made available to EAZA Pole to Pole Campaign. The second year the ‘2 degrees is the limit’ petition initiative was launched. We’ve collected 17.160 signatures in total (both hand-written and digitally).  The signatures, printed on recycled paper with a total weight of almost 10 kg, have been handed over to the Secretariat of the United Nations Framework Convention at the intergovernmental meeting on climate change in Paris in December last year.  The Paris climate summit, COP21, resulted in an Agreement to curb climate change! Despite the fact there still is a lot to be done, we now may say that the global willingness to tackle the problem of climate change is increasing. Back in 2013, before the Pole to Pole Campaign kicked off, the campaign team identified and formulated the following objectives:

These objectives have all been fulfilled, and yes, this awareness campaign has been quite successful! But this is only the beginning, ongoing action is required. That’s why it has been decided to keep the Pole to Pole Campaign website up and running, you can continue to take the pledge and resources will continue to be available at no cost. News and developments about climate change as well as new initiatives from the zoo and the conservation community will be published right here on the campaign site. Lots of zoos will continue spreading the word and organizing awareness raising activities.

The campaign team would like to express gratitude to all zoos and individuals who were involved in making this campaign a success. Thanks to your effort and dedication we have been able to make a difference! Please continue to use energy wisely, visit the Pole to Pole Campaign website regularly and stay connected!