One of the richest ecosystems on the planet may not survive a hotter climate without human help, according to a sobering new paper in the open source journal PLoS ONE. Although little-studied compared to lowland rainforests, the cloud forests of the Andes are known to harbor explosions of life, including thousands of species found nowhere else. Many of these species—from airy ferns to beautiful orchids to tiny frogs—thrive in small ranges that are temperature-dependent. But what happens when the climate heats up? 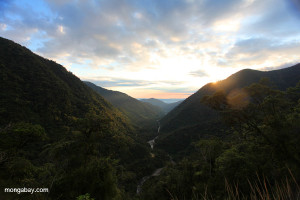 “Shifts in temperature will require upslope migration for most species to remain in equilibrium with climate and therefore potentially avoid extinction,” the scientists write in the paper. However looking at aerial photos and satellite imagery of Manu National Park from 1963 to 2005, the researchers found that Andean cloud forests may run into an insurmountable border as they attempt to migrate up mountain sides: puna grasslands. Although the temperature has warmed significantly since the 1960s, the researchers found that the treeline bordering the Andean cloud forests and high-altitude grasslands had hardly moved. In fact, according to the research, 80 percent of this border remained stable in the study area since 1963. This transition area between one ecosystem (cloud forest) and another (puna grasslands) is known to scientists as an ecotone.
Read more at http://news.mongabay.com/2013/0918-hance-cloud-forests-climate.html#QpzsC4eXbhGtKzgl.99