In the wake of the widely reported release of the new United Nations IPCC report on climate change, the leading zoos and aquariums in Europe and North America have united to launch a campaign to influence the energy consumption of their nearly 300 million visitors. The campaign, called Pole to Pole, was unveiled to the 700 delegates of the annual conference of EAZA, the European Association of Zoos and Aquaria, and highlights the effectiveness of collective action in reducing energy use and protecting biodiversity in the Polar Regions and beyond. An initiative of EAZA and its North American counterpart AZA, the campaign underlines the role of zoos and aquaria in holistic conservation that reinforces efforts on the ground with captive breeding programmes. 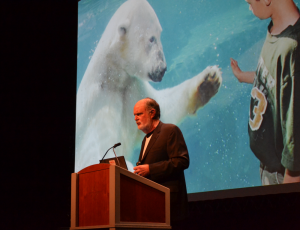 Robert Buchanan, founder of Arctic Action Teams, a leading activism group and a key partner in the campaign, underlined the findings of the IPCC report and demonstrated the potential effects of collective action. “We can be the heroes of future generations,” he said in an impassioned speech to the delegates. “We have inherited an amazing world and it’s up to us to keep it pristine for the generations to come. Our actions now will determine the future of the planet, and everything that lives in it.”

“The poles are an indicator of the health of the planet,” explains Dr. Ian Stirling, one of the world’s leading experts on polar wildlife. “When we see the huge reductions in the ice covering the poles, and the effect that that has on species that live there, we can get an insight into the danger facing the whole world.” 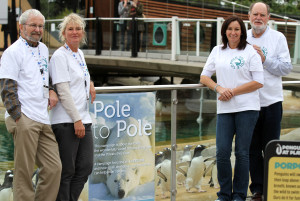 The campaign calls on zoo and aquarium visitors and the wider public to take small individual steps that can make a huge collective difference to endangered species and ecosystems both at the poles and everywhere in between. Pole to Pole research estimates that if all of the 140 million visitors to EAZA zoos with a mobile phone were to disconnect their phone charger after charging, this would save up to 29 million KW of energy equalling 422.149 oil barrels or 119.032 football fields of forest.

The campaign will run for 2 years and will encompass efforts on social media and on site at EAZA and AZA institutions to raise awareness of the issues and how small actions by everyone can help to save species including the polar bear and the king penguin. You can find out more, and take the pledge to reduce your energy use in specific ways by visiting the official campaign website www.poletopolecampaign.org. Now that there is no real doubt about climate change caused by humans, the sooner we can get started on reducing emissions, the better.