The past months Copenhagen Zoo embarked on several Pole to Pole campaign activities. Copenhagen Zoo titled the campaign ‘Klimakampagnen’ (which literally means Climate Campaign). A campaign logo with a green paw was designed. When the zoo visitor sees the logo they know that it has something to do with the climate campaign or with the Zoo’s environmental measures. Copenhagen built an exhibition which is globe-shaped and has 8 information areas with the following themes: the Climate Campaign in the Zoo, the Pole to Pole Campaign, the global campaign (Zoos & Aquariums for 350), a short and easy to understand explanation on ‘What is climate change’ and a quiz on animals and climate change. The zoo visitor can take a folder which guides them to eight zoo animals. When at the chosen eight animals, a sign will explain more about the particular animal and how climate change affects them. 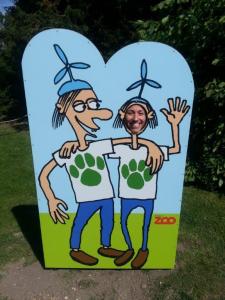 Copenhagen Zoo also set up a quiz: Are you a climate nerd? The visitor can quiz themselves (electronically) on day-to-day behaviour and find out whether they are a climate nerd. Hopefully by taking the quiz it will make them think about the choices they make in the future. In addition to this, information and videos on the Zoo’s environmental initiatives are presented, including QR codes to videos that explain which environmental measures have been taken in a particular building or enclosure. You can view (in Danish) the videos on the Zoo’s website here. Copenhagen Zoo is also working on reducing the Zoo’s carbon emission by deploying the Climate Compass. 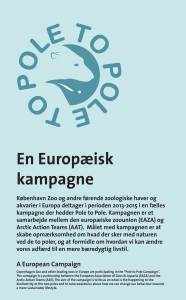 The IPCC’s (Intergovernmental Panel on Climate Change) Fifth Assessment Report will be launched in Copenhagen in late October. Copenhagen Zoo is therefore working together with the Danish Ministry of Climate and Energy on preparing a small extra exhibition on animals and climate change. Last week the climate minister opened up the exhibition. This week Copenhagen Zoo organized the ‘staff-climate-week’ with the following activities included: daily climate facts on info-screens, daily climate food facts in the canteen, a questionnaire about the staff in their daily ‘green’ routines and a ‘Zoocling (=cycling) to Work’ competition’: the winner wins a gift-voucher to a bike shop.