Climate change is impacting every facet of human civilization from our ability to grow enough crops to our ability to get along with each other, according to a new 2,300-page report from the Intergovernmental Panel on Climate Change (IPCC). The massive report, from the Nobel Prize-winning body, states definitively that climate change is already affecting human societies on every continent, including decreasing agricultural output, worsening access to freshwater, exacerbating extreme weather, acidifying the oceans, and adding the risk of internecine conflict. 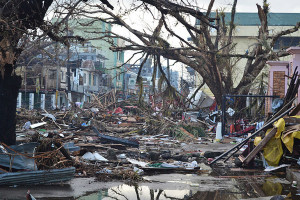 The UN noted earlier this month that the world will have to produce 60 percent more food by 2050 due to population growth (from seven billion today to a projected nine billion in 35 years) and changing diets of the wealthy, including greater consumption of meat and dairy both of which also come with higher carbon footprints.

“Climate change is acting as a brake,” said Michael Oppenheimer, an author of the IPCC report. “We need yields to grow to meet growing demand, but already climate change is slowing those yields.”

“Throughout the 21st century, climate change impacts will slow down economic growth and poverty reduction, further erode food security, and trigger new poverty traps, the latter particularly in urban areas and emerging hotspots of hunger,” reads the report. The poorest will likely be hit hardest, say the scientists, but the world’s rich will not be immune either.

“Things are worse than we had predicted,” Saleemul Huq, an author on the report, told the Associated Press, referring to the last report on climate impacts in 2007. “We are going to see more and more impacts, faster and sooner than we had anticipated.” Scientists have already been taken aback by the rapidity at which the Arctic Ocean is losing its sea ice, and by the pace at which some species are migrating.

While global human society—and the natural world on which it depends—are already facing significant changes due to global warming, the report stresses that the level of risk humans face in the future will be determined by efforts to decrease greenhouse gas emissions today.

“This report tells us that we have two clear choices: cut emissions now and invest in adaption—and have a world that has challenging and just barely manageable risks; or do nothing and face a world of devastating and unmanageable risks and impacts,” said Samantha Smith, leader of the WWF Global Climate & Energy Initiative, adding, “we still have time to act. We can limit climate instability and adapt to some of the changes we see now. But without immediate and specific action, we are in danger of going far beyond the limits of adaptation.”