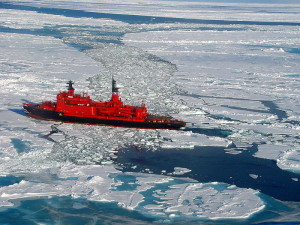 As the Arctic Ocean becomes increasingly ice free it is tempting for many countries to exploit the region for hitherto inaccessible resources like oil and natural gas. Energy companies apply for drilling permits and shipping companies are eagerly looking for newly opened routes through the Arctic.